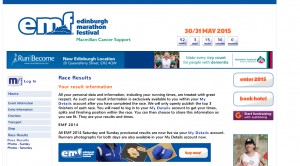 Plenty of people have demanded an explanation from the organisers, but GSI have steadfastly refused to enter into any debate on the subject, whether it’s on their facebook or twitter accounts, or on popular running forums where the matter is being discussed.

So why have GSI Events taken this decision?  Well, the quoted reason on their website is thus:-

All your personal data and information, including your running times, are treated with great respect. As such your result information is exclusively available to you within your My Details account after you have completed the race. We will only openly publish the top 3 finishers of each race. You will need to log in to your My Details account to get your times, splits and finishing position within the race. You can then choose to share this information as you see fit. They are your results and times.

Keeping people’s results private doesn’t seem a particularly convincing explanation, seeing as how you can go onto the website that sells race photos (marathon-photos.com), enter a name and up pops their photos with their finishing time alongside.

Now, at Xempo, we must admit a vested interest here.  Due to the nature of the product we sell, we chose to use published race results to verify the race times submitted to us by our customers.  Whilst we can still use the marathon-photos website, it isn’t really a problem to us.  But in our three years of existence, GSI Events are the only ones we have ever come across (in the whole world) where results list are deliberately hidden from view.

So for us it’s only a mild inconvenience, but for runners the results and ranking do matter.  Many will need to use them as qualifying criteria to other races.  The Boston Marathon and London Marathon request a link to the official published results, which is quite difficult when they don’t exist.  And similarly, many will want an official listing of their time on ranking websites such as Power of 10, or Run Britain, to show where they sit in comparison to their peers and clubmates and fellow age groupers.  If no results list exists, then we might as well just all run round our own local parks on our own and record our own individual times, seeing as how they would, just as in Edinburgh, similarly have no context.

The same people organise the Bournemouth Marathon Festival, and here the same non-disclosure of race results applies.  They are also organising the new Scottish Half Marathon in September this year, and tucked away in the small print is the same commitment to not publish the race results (see point 12)

Furthermore, the Edinburgh marathon is a bronze label IAAF race, which means that it has to conform to a number of obligations > https://iaafmedia.s3.amazonaws.com/competitioninfo/1ac72291-30f3-40b8-93c6-07d53136f091.pdf

3.9.1 Races must provide fully electronic timing by use of active or passive transponders. Real time splits and final results should be made available to media, spectators and online.

3.12.1 Races shall email the official results of the competition for the top 20 male and top 20 female finishers to the IAAF immediately following the completion of the competition, using the format in the Race Directors Report Form.

3.12.2 Official Results for all participants should be made available on the race’s website within the shortest possible time.

If therefore they are obliged to publish results, and have actively chosen not to (there is no legal basis on which data protection is a valid excuse, particularly as thousands of races have no problem doing so every year), then what is the real reason?

Well, we are left to conclude that they have something to hide.  And to understand why, you have to look at the race not as a runner, but as a potential investor or sponsor.  They simply don’t want us to know how many (or how few) are actually running in their race.

As a business in the running industry, Xempo (and any other business in this sector) look to put ourselves where our customers are.  That means supporting races through sponsorship, going to race expos to sell our wares, or advertising through event literature.

The companies who take our money to be there, be they exhibition organisers or race event managers, like to sell their events to us based on the number of participants who we are likely to encounter.  The overwhelming majority are open and honest with their customers, but too many frequently overstate this number by quoting clearly inflated numbers, such as “number of race entries” rather than “number of finishers” – the latter is usually between 20-40% lower than the former.  The London marathon for example is a major investment for any exhibitor (a big brand will spend about £150k just to be there) and even for small companies like ourselves, it will be our biggest expenditure of the year running into several  thousand pounds just for the floor space.  The organisers sell it to us on there being upwards of 70k visitors.  We know that this is a number based on 45k race entries plus an additional estimate of friends, family and other non-related visitors.  We similarly know that 10k runners won’t register each year, and the additional estimate is way off the mark; just try coming along on a Thursday afternoon and it can feel almost empty in there!

London marathon isn’t the only running exhibition that overstates its popularity.  Some others do the same, and races can similarly be, shall we say, over-enthusiastic about how popular they are.  It is understandable as to why they should do this, but while a race might tell us how they have three thousand registered entrants, they are pretty reluctant to mention subsequently that only two thousand ran on the day, as we had already noticed in the results.

Edinburgh has for years happily called itself “Britain’s number two marathon”.  Whether this was based on quality or quantity has never been apparent.  However, with dwindling numbers (only 8620 finishers in the full marathon this year – we asked someone we knew was running and who had access to their own finishing position in relation to the field), it is clear that it is not in their interests to disclose too fully the annual results lists in case this decline in popularity becomes too much of a concern to sponsors and, perhaps more importantly, potential future sponsors.  Far easier to just add up all the entrants to all the races and quote an more uncontestable bigger number.

With Brighton, Manchester, Chester, Liverpool and York all offering similar sized marathons, Edinburgh might have to reverse their declining entry numbers if they still want to keep this arguable unofficial title.  As a business in the marathon world, we are only too happy to get involved in offering support, sponsorship and investment in any race; we just ask that we get fair treatment in return, and not an obfuscation of the statistics in order to convince us to invest unwisely.

Of course, this is just our theory of why Edinburgh is behaving uniquely in this regard.  We are happy to be proved wrong if the GSI team would care to respond.  But perhaps they should respond to the many runners who have already asked them the question direct, as to why results haven’t been published.  We can wait.